Okay, I meant to get around to this ages ago, but here it is! I got some interest in seeing OakBrown and Steve so I'm finally releasing their extremely unfinished, early, alpha, what-have-you builds into the wild. 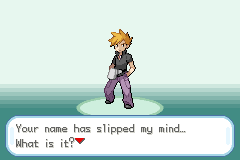 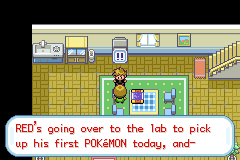 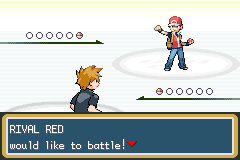 The changes in this build go up to and including Viridian City, and excludes a new title screen (which is kind of why it isn't included in the screenshots). I quite like this hack and think it has a lot of promise (it was fun trying to figure out how the obstacles in Red's way would be set up and/or removed by Blue, like how the old man would actually get his coffee from Blue, which is what gets him out of the way for Red to keep going). If anyone wants to continue this and can demonstrate that they're capable, then I'd be glad to hand over the reigns. 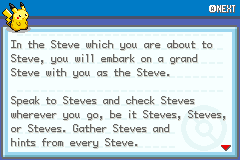 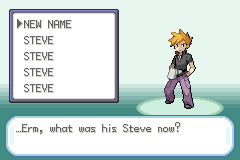 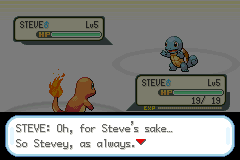 Okay, this one I'm sure will be the only ever build of Steve to release. The gag is great for the start of the game, but it might have gotten grating if it had continued any further. So with that in mind, this is probably the perfect length for Steve to be (phrasing?). There's also an engine change in there that I hope you'll catch; I'd completely forgotten about it so when I stumbled on it again it cracked me up. Please Steve responstevely.

Also unrelated to either hack, progress on the Emerald disassembly (on which CrystalDust will rely) is going swimmingly. We made a huge push for all baserom dependencies to be extracted, so technically modifications are now possible (even though most of the engine isn't decompiled yet). It's an exciting time!