Everything changed when the lawyer nation attacked.

If you're reading this blog, chances are you're interested in some juicy CrystalDust development info. If you somehow made it here without knowing what it is, CrystalDust is the Pokémon ROM hack I've been developing off and on for about seven years at this point. (...That just hit me. Damn.) For the longest time, ROM hacks were thought to be in a legal gray area, where Nintendo didn't really care about them and let them be while they cracked down on fangames; the thought process behind this was that since we weren't distributing any copyrighted content and were instead releasing patches to apply onto original Pokémon games, this was more fine than fangames that were ripping assets straight from official games and redistributing them. But then it finally happened.

One certain ROM hack (which I will not be naming here so as not to draw any unnecessary attention to myself), through the power of Twitch Plays Pokémon and a very professional trailer, managed to get itself extremely popular. The developers announced the release date of the completed game to be the 25th of December 2016 after being in development for over eight years. It was looking to be the most impressive hack to date, taking full advantage of the pokecrystal disassembly project and pushing the GBC to its limits (I was informed that the prism on the titlescreen is actual raytraced 3D!). Sadly, just four days before its intended release date, the developers got a cease and desist notice from Nintendo informing them that they were no longer allowed to work on anything else concerning that ROM hack or related to Pokémon at all.

Obviously this was a huge difference from how Nintendo had been dealing with hacks in the past, and it took the whole community by surprise. They were setting a brand-new precedent where there hadn't really ever been one officially. For a while, I was considering just leaving hacking altogether so as to not put in too much effort into something that'll just get killed before anyone can see it, because who wants to work on something knowing that all your work can be thrown into the shredder with a single email? But then I decided, why should I let that affect me? Just because they can doesn't mean they will. Pokémon ROM hacking has been around since the games have existed, and not once have they been targeted before this. I just can't let my hacks become too popular.

...Which probably means giving a copy of CrystalDust to the Game Grumps probably wasn't a good idea. 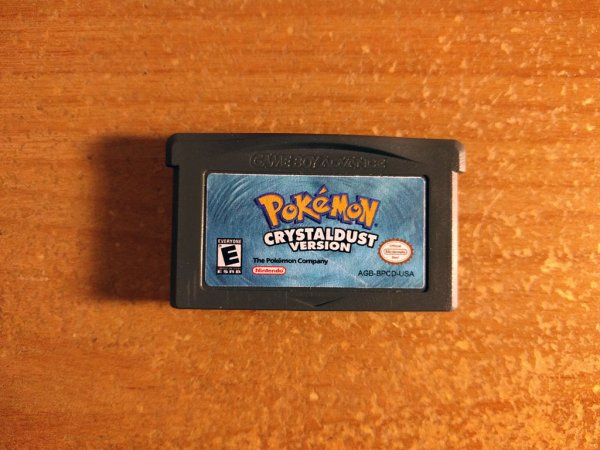 So literally three days before the takedown occurs, I attend an awesome Game Grumps Live show with a special cartridge and a goal in mind: get it to Ross (a member of GG). I'd made the cartridge out of an old EZ-Flash 3 in 1 that could take a game and run it just like a regular cartridge without the need for a DS slot 1 cart. During the show, I tried to get Ross's attention as he walked down the aisle, but he told me to "give it to garbled". After the show, I almost just left, but waited for a bit longer and managed to meet up with the guys running the show. I told one of them what it was and if he could get it to Ross "or Arin or whoever" and he said he would! At that moment I was stoked that they would definitely get it and play it, possibly even on the show. Now with the fact that Nintendo has come after one ROM hack for getting too popular, I'm terrified that if they so much as mention it (which they haven't yet) I could get targeted.

Obviously Nintendo was within their rights to take down the hack. They didn't go after them for copyright infringement (which they technically could have argued because they were only distributing the patch which contained code they wrote) but instead for trademark infringement, such as the use of trademarked characters (which, let's face it, virtually all Pokémon hacks are guilty of for obvious reasons). I just wish they hadn't. I may not personally be quitting hacking over this, but the long-term effects on hackers could be disastrous, meaning a community I've been a part of for so long could just wither away and die. That's what this cease and desist makes me terrified of: the precedent they're setting, and its implications for a lot of my friends.